A simple form of image interpretation involves assigning invisible light bands to red, green, and blue channels to create a false color image, commonly referred to as ‘band combinations’. Band combinations are used to highlight the presence of certain materials and/or minimize the representation of other features. The most common band combination is Natural Color and is used to mimic what the human eye would see over a given region, another common combination is Color Infrared which highlights the presence of vegetation. 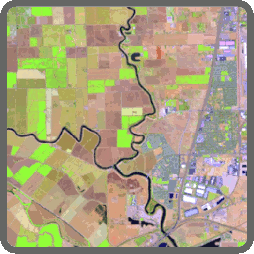 False color images can distinguish muddy water from muddy land, pinpoint fires, or clearly show the extent of a growing city. The example combines the moisture sensitivity of mid-Infrared reflectance with the vegetation sensitivity of near-infrared to highlight agricultural fields.

In this imagery over rural Uganda, near-infrared sensors augment imagery to highlight vegetation (False Color) and to measure the health of that vegetation (NDVI). These images show a range of imagery resolutions from different growing seasons.

Each sensor has a specific set of spectral bands designed for the mission of the satellite. While some sensors may have only 3 or 4 bands, others may have dozens, or hundreds (these are called hyperspectral sensors). Many earth-observing satellites include bands that fall within commonly used ‘windows’, such as “red” or “near-infrared”.

While the individual band specifications can vary, a “blue” band on any sensor is going to roughly fall within 0.45 and 0.5 microns.

These different spectral bands can be combined in different ways to enhance the contrast between different categories of interest. The most common is to use the red, green, and blue bands to create a natural color image, like what would be seen with the naked eye. See the following chart for common band combinations that bring about specific insights in the data.

In addition to false color composition, spectral bands can be combined mathematically to emphasize a particular set of characteristics. These techniques may draw from all relevant bands, rather than the three band ‘limit’ set by human vision, to draw out very specific characteristics. This generally demands greater processing of the raw data to minimize noise across the deeper image stack. Mathematical transformations can be combined with ground data and well-developed algorithms to answer more quantitative questions. While false color can be used to detect the subjective health of agriculture, the proper mathematic transformations might be able to measure the health of each field using a transferrable metric. While false color composites can distinguish mud from water, a mathematic transformation could measure how wet the mud is. 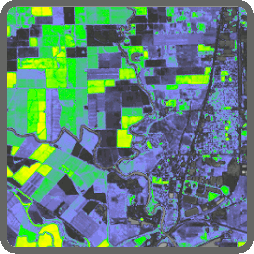 Vegetation and other Indices

Synthesizing data from multiple spectral bands, through ratio or coefficient-based transformations, can produce indices that can be used to compare every point in an image on the same scale. The most common indices, such as Normalized Difference Vegetation Index (NDVI) and Enhanced Vegetation Index (EVI), measure vegetation health and can be used to distinguish between types of plants. Soil Adjusted Vegetation Index (SAVI) and its counterparts OSAVI and GSAVI suppresses the effects of soil which can lead to erroneous NDVI calculations in areas with sparse vegetation. A comprehensive list of vegetation indices and their formulas can be found at l3harrisgeospatial.co. Common use cases of vegetation indices are vegetation mapping and monitoring, biodiversity assessments, forest degradation assessments, biomass mapping, crop condition monitoring and predicting crop yield, and carbon capture assessment. Other common indices have been developed to measure burn severity, geologic qualities such as the presence of certain minerals, water turbidity, mud, snow, and more. Normalized Difference Water Index (NDWI) and Normalized Difference Snow Index (NDSI) – Commonly used for water mapping and water quality monitoring, change detection, flood monitoring and damage assessment, snow and ice mapping and monitoring. Normalized Difference Built-up Index (NDBI) – emphasizes manufactured and built-up environments in imagery. 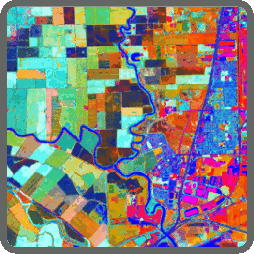 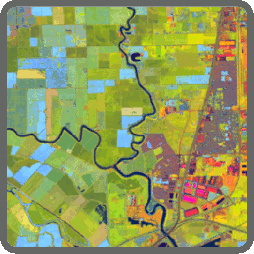 KT-Transformations are a type of PCA, which, rather than being data-driven, combine information from multiple bands using specially developed coefficients to create the biophysically meaningful variables of Brightness, Greenness, and Wetness- essential components of a landscape.